My lightning talk at the Future of Micropayments conference on November 5, 2020. 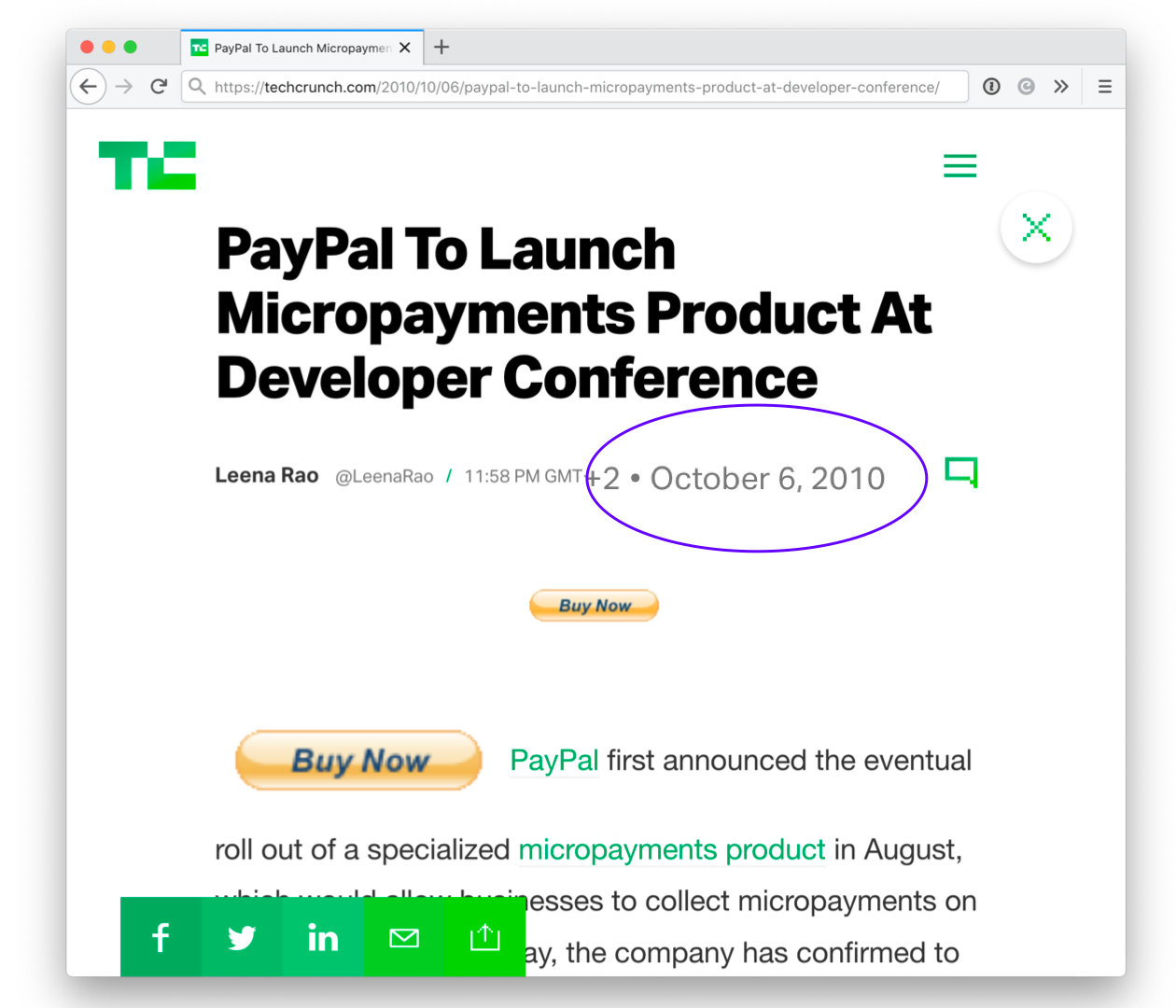 Hi, my name is Jeremiah Lee and I’ve been a fan of micropayments for a long time. I tried to create micro tipping service using then new APIs from PayPal back in 2010. Despite working with their developer advocates, PayPal abruptly shut me down. I moved on to other ideas, but I always felt that one was special. 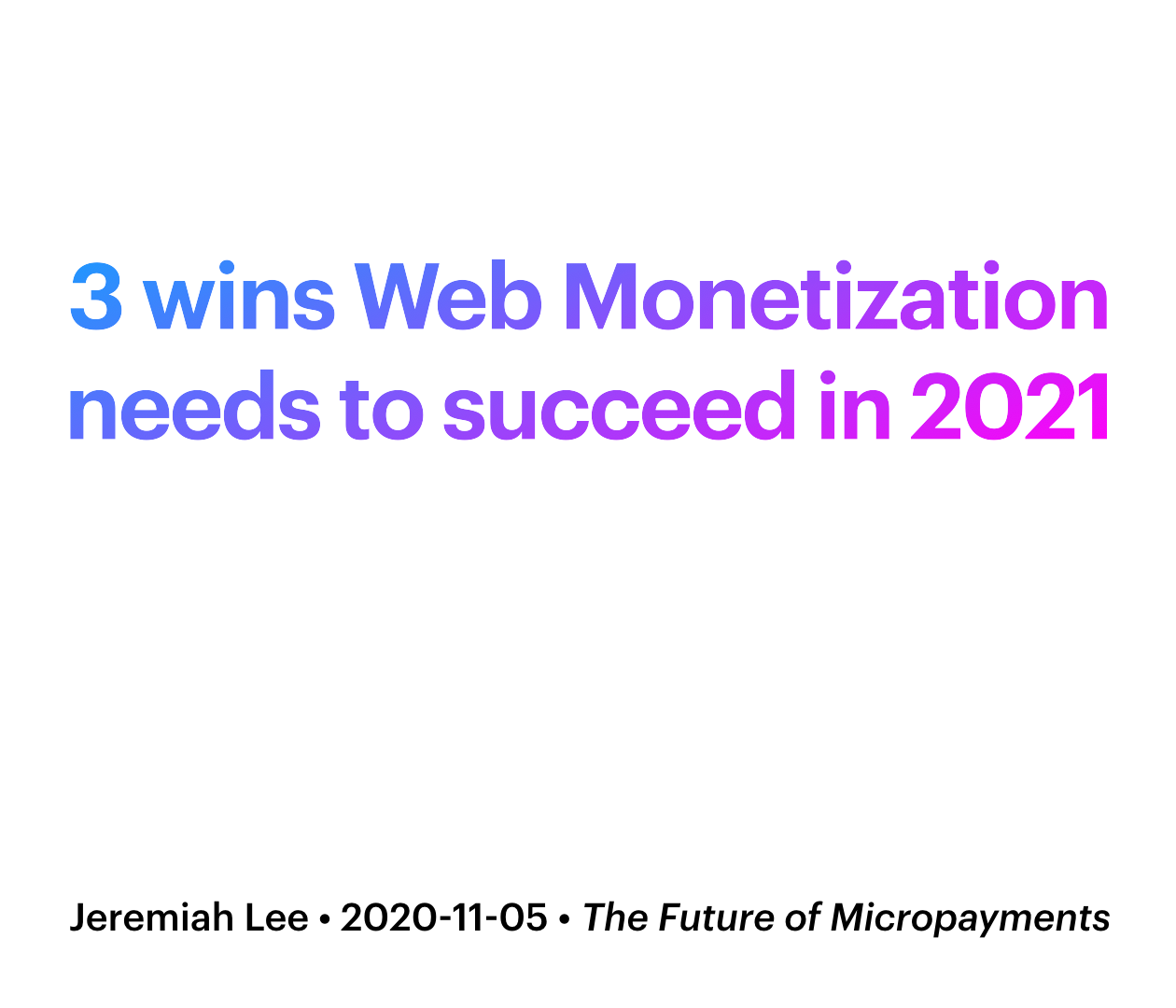 When I learned of Flattr, I immediately signed up. Same with Brave, but I just couldn’t abandon Firefox. There is a lot of prior art in this space, but Web Monetization is different.

The Web has been powerful because it has been outside the control of any single company. We can’t break an oligopoly of online advertising networks with a monopoly on micropayments.

And that brings me to the first thing Web Monetization needs to win: more providers.

Coil, I am so grateful for you, but you can’t carry this vision on your own. We need more Web Monetization providers. The European Union is desperate to counter the American companies that control the Internet. They want to fund creators. They want to break surveillance capitalism. They need to get on board with Web Monetization, but to do that, they need Web Monetization Providers in their currency and in their language. Today, Coil only accepts US Dollars and its service is only in American English.

Web Monetization needs its first follower in the Provider space. And that first follower will not be competition for Coil. It will be an accelerant of what Coil has championed to grow the overall market. It will also provide assurances to hesitant content creators that they are not going to be locked into a single vendor. 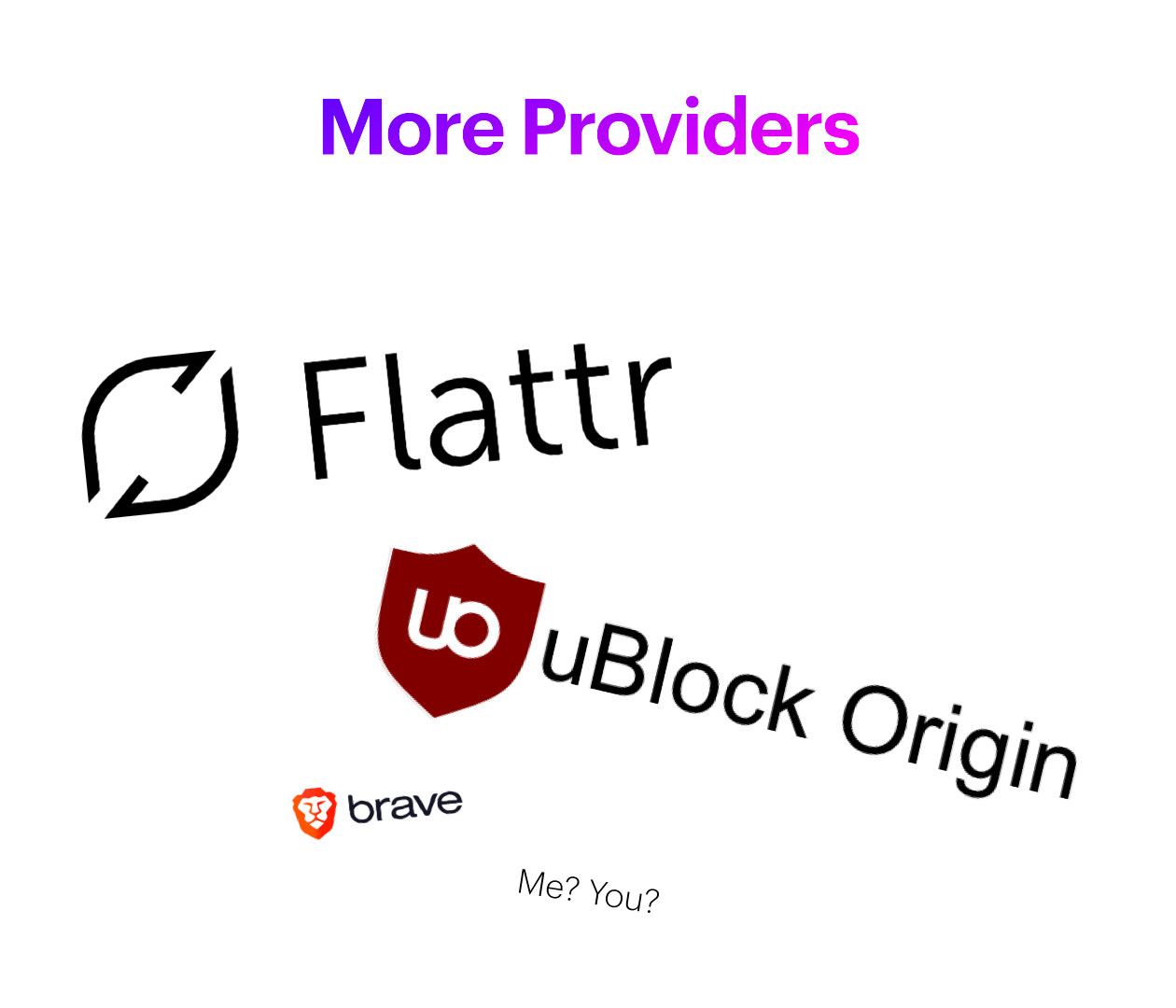 I think an ideal candidate is Flattr. Or perhaps uBlock Origin or another ad/tracker blocker who wants to give its users a way to not only stop the bad stuff on the Web, but to contribute to a better model as well. 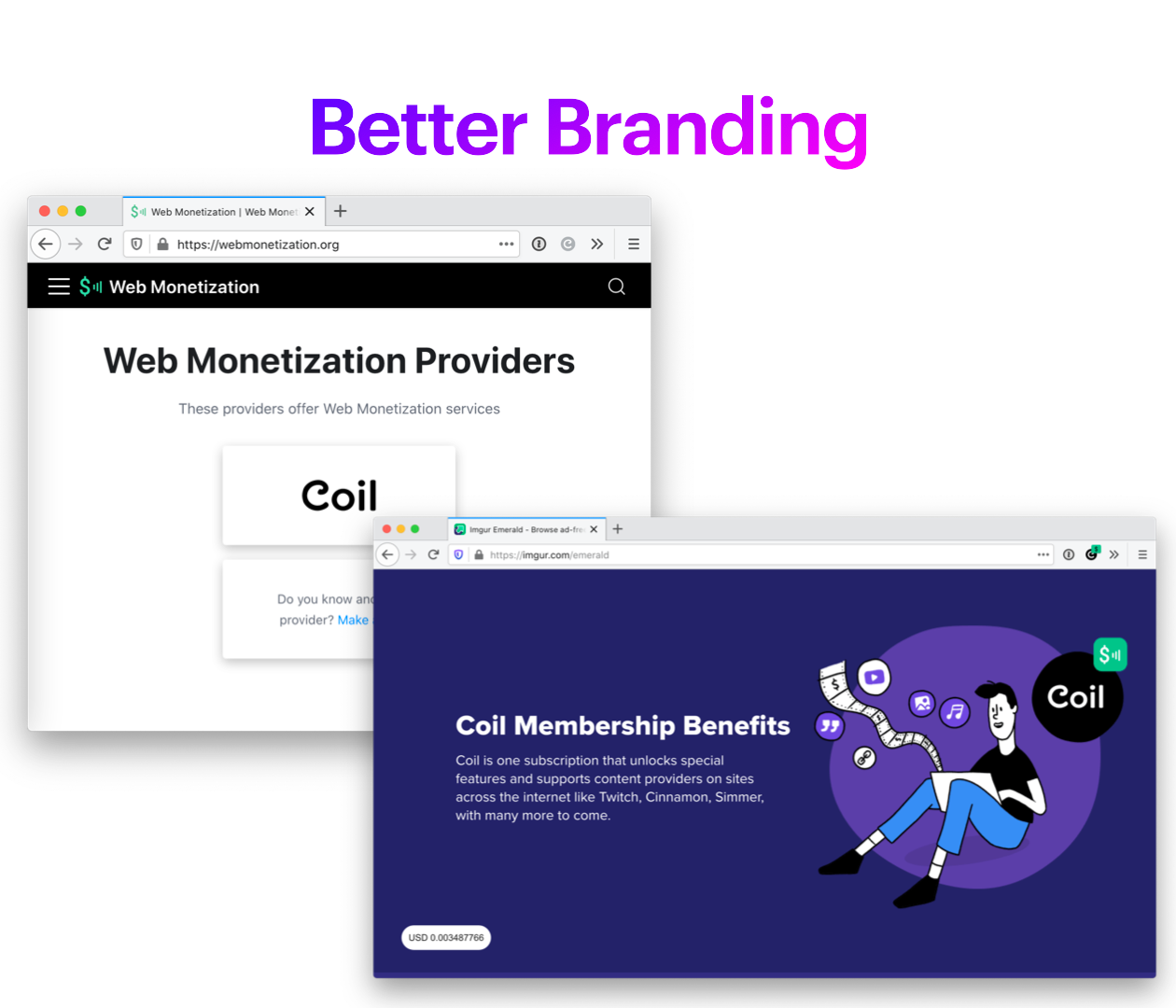 That brings me to the second thing Web Monetization needs to win: better branding. 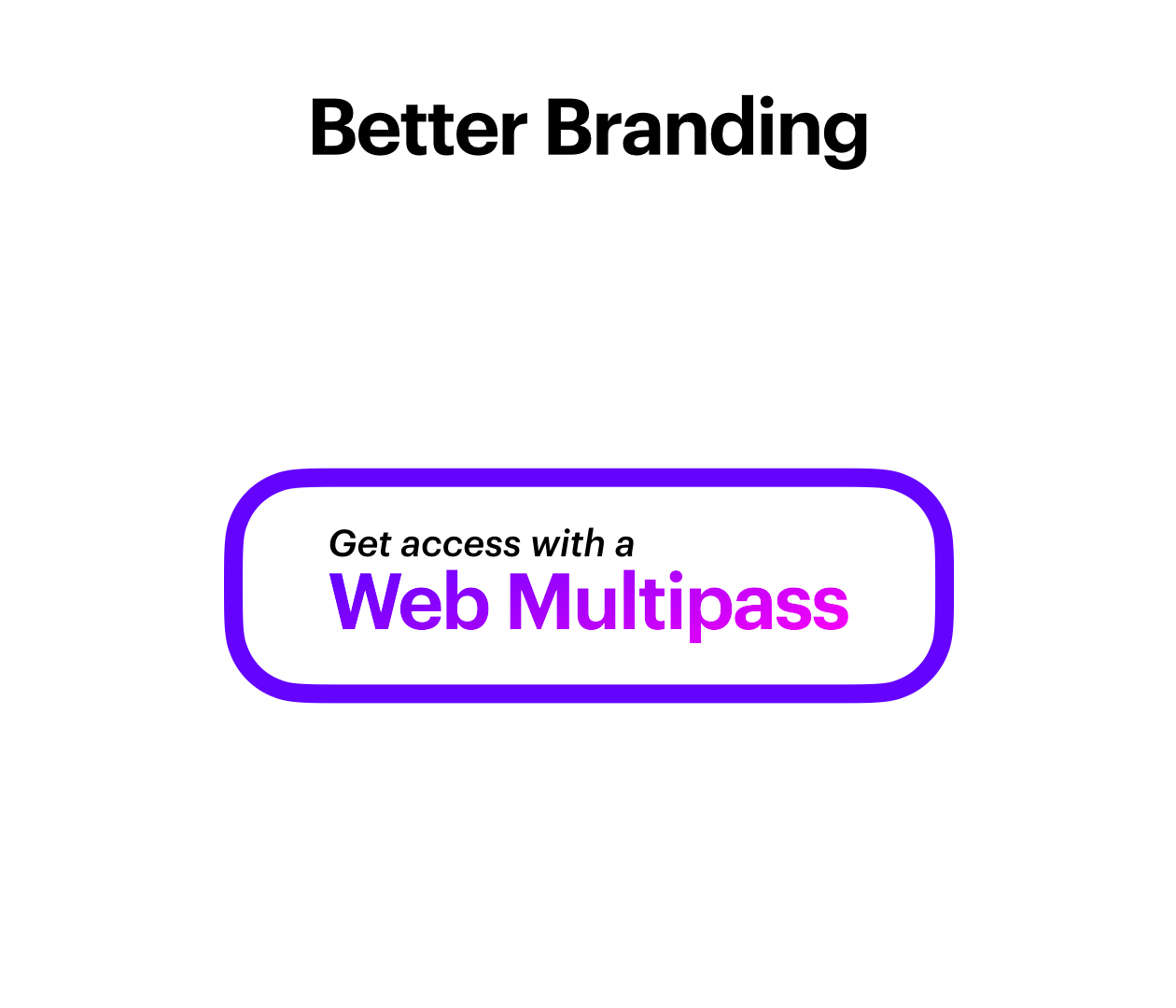 So instead of telling people they need a Web Monetization Provider subscription, I propose we call it the Web Multipass. It’s a pass to access content from all over the Web available for purchase from Coil and other fine retailers. The emphasis is on the capability, not the provider of the capability. 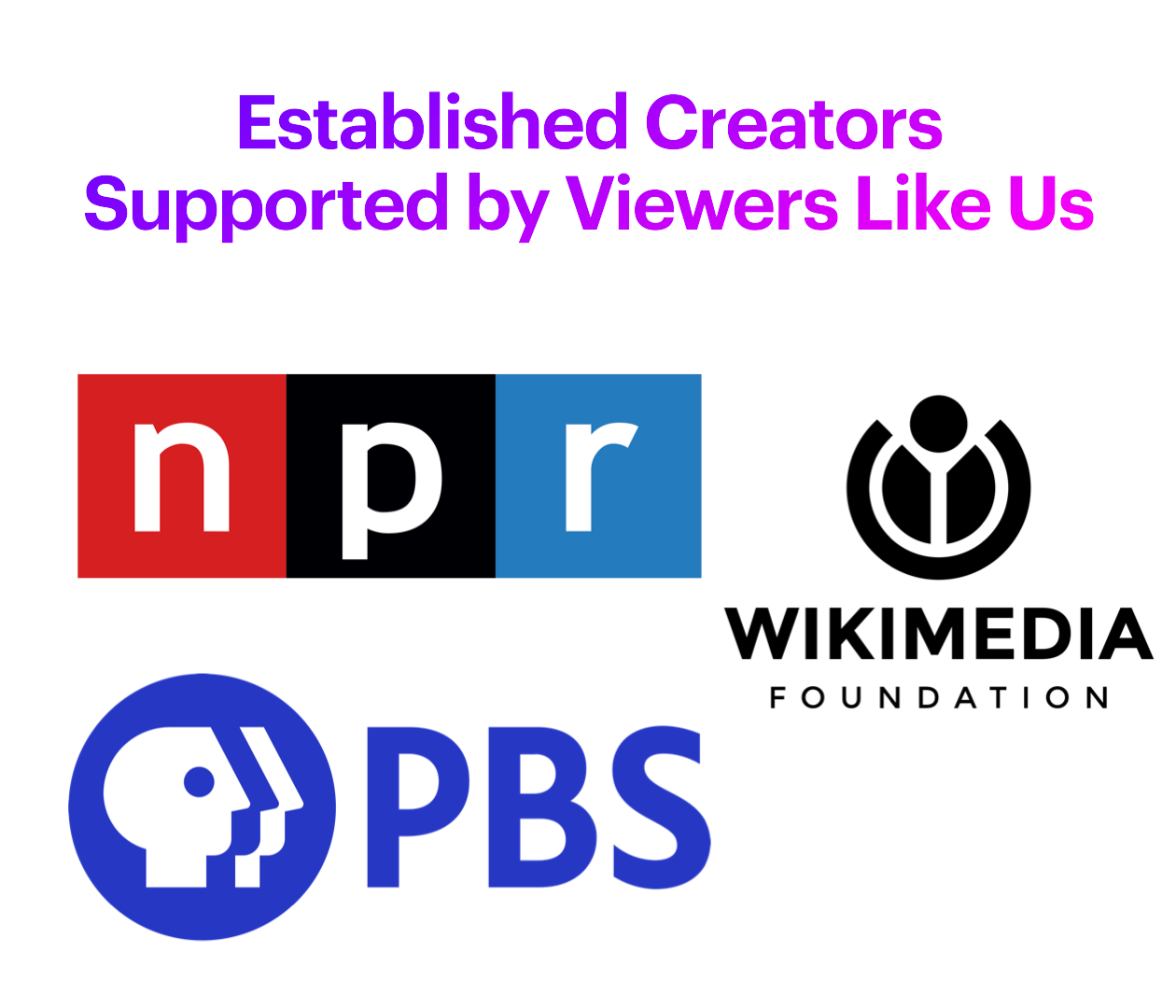 The third and final thing I can squeeze into a lightning talk about what we need to win is: an outreach effort to get existing content creators with high brand affinity to adopt and promote Web Monetization, ahem, the Web Multipass, as a way to support them. The three biggest that come to mind are NPR, PBS, and Wikipedia. These 3 non-profits are well known and respected content providers. They also raise most of their funding from their audiences. Their audiences want to support them. Getting those audiences to get a subscription will not only help these major creators, but it will help lesser known creators, because when those new subscribers who support Wikipedia, they’ll also be supporting thousands of smaller creators they encounter online.

I love that the Grant for the Web is creating opportunities for creators who don’t yet have audiences, but building an audience who wants to support you is hard and takes a long time. To get more people signing up for a Web Multipass, we need to convince content creators with established audiences that they can supplement their revenue safely. I don’t know who has a connection to NPR or the Wikimedia Foundation, but I’m certain it’s not an impossible connection to make. And even if PBS or NPR themselves are not interested yet, there are hundreds of affiliates stations who probably will be.

Again, I think the Web Monetization API is the best implementation yet of micropayments to solved real problems for content creators and users of the Web. It hasn’t seen the adoption I’d hoped to see in 2020, but I think a few strategic steps will help it breakout.